Not Much to report on this day as I was in work for 13.5hrs. Pretty uneventful but it gives me an opportunity to post a few pics of my growing collection.

The Mrs bought me my first humidor for my birthday at the end of January. It is a glass top humidor that she bought in James Fox for around €100. We have seen it since in the Decent Cigar Emporium for about €20 less.

So bare in mind on the 23rd January I just received my first humidor and I had only one cigar to put into it. It was a Davidoff Special R.

As I write this on the 10th April, you will have seen from my previous posts that I have been buying and smoking a lot of cigars in the last eleven weeks. I wish I had time to smoke more but the offset of that is my collection has grown considerably. I have attached three pictures of my humidor collection within those eleven weeks. I don't have the exact dates of each pic but you will get the general idea. A passion for cigars, a few quid invested every now and then topped with an understanding girlfriend all ads up to a collection building very fast.

The final picture was while I was seasoning my new humidor. What I have done since is separate the cigars I want to age or keep for special occasions in one humidor and the cigars I hope to smoke as soon as I can in the other.( I will post pics in a later post) The hardest part for me now is choosing which one to smoke.

All cigars are Cuban and 100% Puros. All Cigars have been bought in the Decent Cigar Emporium. I must say that I am not sponsored, affiliated or compensated by this shop in any way ( Although I wish I was!!!) 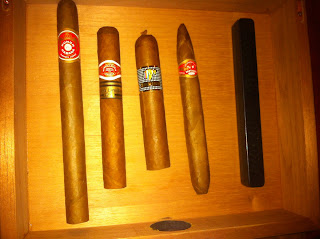 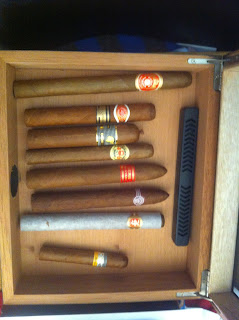 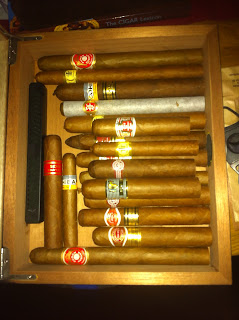