Sundays, I love every second Sunday. Why? Well that's my only day off every two weeks. One day in every fourteen!! Somebody has to do it.

The weekend was grand. Worked Friday and a very long day Saturday. Ireland was playing Scotland in the rugby and Dublin was invaded by Scots. A twelve hour shift standing on the door of the very popular establishment where I work. Ireland won which subdued the Scots somewhat but after a few Guinness you would have never knew who won as Irish and Scots men danced and hugged each other. I will say one thing about rugby, there is a friendliness and respect seldom found in other sports, and that's coming from me, a football fan.

So as I said, my place of work at the weekend is rarely quiet and Saturday was no different. A long shift was rewarded by a few pints after work and after a short stumble home and what seemed like an even shorter stay of slumber it was Sunday. My Sunday off!!!

I was awoke by my phone. It was the Mrs. I have never known a woman who gets up as early. She was out with her family and rang to get me up for the Manchester United game. Fair play to her.

So with a groggy head and tired eyes I sat to watch the match. 90 minutes later, excluding half time, I was full of the joys of life. United beat West Brom 2-0 with Rooney getting a brace. What made the result all the sweeter was hearing "city" lost 1-0 to the mighty Swansea. It was already a great day.

The Mrs arrived home during the match and once it was over we went for a walk around town. As dull a day it was, the sunglasses were still needed. I may have been in a great mood but my body was still recovering from the pints the night before.

My mood was lifted even more shortly after. The Mrs went off on her own for a while and when we met up again she presented me with a bag from the Decent Cigar Emporium. Inside were two fantastic gifts. A Romeo y Julieta Escudos Limited Edition 2007 for aging and a Partagas Presidentes which I am going to have shortly.

Cigars in hand we went to the local for the hair of the dog. A few hours spent in the company of the Mrs and  our sea-faring barman "Roundy" was a great way to spend the evening.

So home now, blog almost done and looking forward to lighting my Partagas Presidentes to end of my day. Only thirteen more days to my next Sunday off!!!! 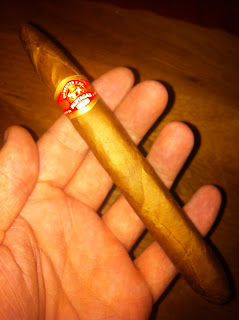 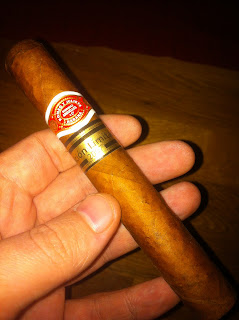