Half Day, But Was It Really?

So I ended up taking a half day today. I was just sitting in front of the PC reloading my mail. Not really a productive day. So up I got, walked to the bus and within 30 mins was back in Dublin City center.

The Mrs was off today so I got her ready and we went for a walk around town. To be honest I probably got more work done calling in on people than sitting in the office waiting for them. Personal touch, that's what its all about.

Business calls done I headed for the Decent Cigar Emporium on the Top of Grafton Street. I had only one cigar left in my humidor. It is a Cohiba Behike 52 which I am letting age and because I have a big order of 21 cigars and a new humidor on the way I am reluctant to stock up. So with nothing to smoke and not having enjoyed a cigar since Sunday past, I climbed the stairs into what is now my equivalent of a sweet shop.

Wall to wall cigars on display, all looked good and all smelled great. Unlike other cigar shops I have been in I was allowed to peruse at my own leisure without a sales guy forcing me into a decision. I admit that I am a novice when it comes to cigars but that is something I aim to change.

Totally lost and not knowing a great deal apart from Cohibas, Davidoffs and a couple more, I asked for assistance. I explained to the guy where I was on my cigar journey and he was more than eager to help. Again, unlike other retail outlets, he was happy for me exploring the world of cigars. It didn't matter how much I spent or even if I made a purchase. He was happy to explain about various cigars and there origin, age and taste.

I opted to buy two cigars. One to age and one to smoke today. After an insightful discussion I opted for a "Punch Churchill" for my aging process and a rather large and handsome "Grafton Reserve" to smoke. I am not sure of the name or size of the Grafton reserve but he did tell me that the tobacco is already aged and ready to smoke. I think he told me it was aged 6 years or it could be 9. Again I apologise, I am a novice.

After my purchases, I dropped them off in my humidor at home and headed to the local to watch the Manchester United match. Less said about that the better.

So home now, second blog entry almost finished and I am about to spark up my Grafton Reserve. I will tell you what I thought in the next entry as well as my reason for starting on this hobby which I already have the feeling is going to turn into much more. 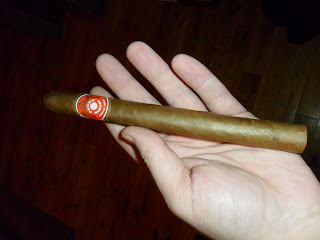 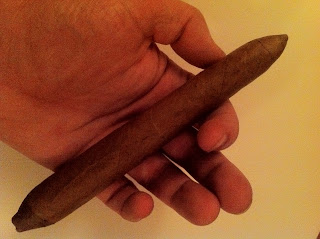 The Grafton Reserve (Perfecto - I think) 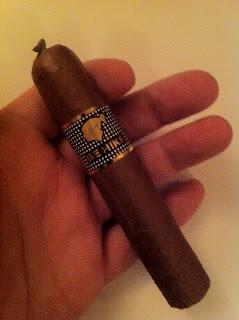